But, the demand for the Smart Fortwo micro cars is decreasing day by day, it is not only decreasing in US but also it has decreased throughout the world. 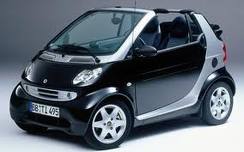 Sales of the Smart Fortwo had been likely to be around 100,000 across the world during the present year 2010 according to Daimler AG. This is less when compared to the sales of the previous year 2009 and the number of units sold during that year were around 114,000.

According to the German magazine, Automotive News Europe, the reason for decrement in sales as said by the dealers is that the Daimler Mercedes-Benz, parent is refusing to expand the smart lineup. Even the company is failing to plan for the four seaters. Only a very less market is present for the two seaters.

The smart cars are slumped because of the strict two seater alignment. When we take the case of the other minicars, they are providing with four or five seater alignment with the similar package.

When compared with the sales of the month of July in 2009, the sales were saw a huge drop. The company officials are expecting its pace in the field of smart cars as soon as the face lifted model would be released. According to company officials because of the Smart Expression program which was launched in July, they are anticipating for the swing in the sales of smart. This program will personalize the car according to the consumer tastes, and the company is expecting increment in the sales.