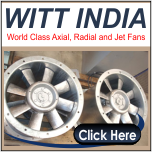 In the boiler, the induced draft fan and forced draft systems can be used with series blades mounted on it. The series of blades will make the pressure difference inside the boiler system, through which the air and the exhaust gases move.